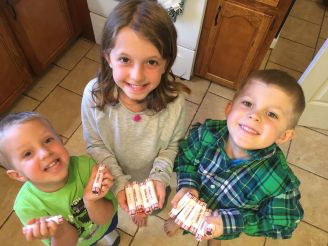 My husband and I have spent our entire married life in the South (first Mississippi, then Florida, and finally Tennessee) but that doesn’t negate the first two decades we spent up “north” in Missouri. When I graduated from college and moved to Mississippi to start my first job, I received a crash course in how to behave in this world that was so new to me. One thing I learned (and quickly!) was to say “ma’am” about 300 times a day.

I adapted quickly and it soon became a habit. “Yes, ma’am. Thank you, ma’am. No, sir,” and “Ma’am?” (my personal favorite used in place of the incredibly rude “huh?”). Not being a born and raised Southerner, however, means that I didn’t mind if people forgot to use this form of respect when speaking to me. It’s still a tad foreign to me even after all these years. We have never taught or expected our children to use “ma’am” or “sir” because none of the other adults in our families expected it. In fact, outside of the South it can be seen as rude and make people feel offended and as if you think they’re old!

This worked for our family and I never gave it much thought…..until that wonderful day we were introduced to Honeybee Christian Co-op. I knew from the first five minutes we had found our “people” here in our new town. I loved the mission, the moms, the children, the classes, the camaraderie, and the support. We joined immediately. The kids were thrilled and “wished every day was co-op!” (That’s called school, kids, and I promise you it’s not as fun as your co-op!) As we attended the classes and interacted with the other families, I suddenly became aware of how un-Southern my children were, despite their Southern births! Nary a “ma’am” escaped their lips when the other moms spoke to them. I was a little embarrassed even though all the moms were very gracious and no one but myself seemed bothered.

I tried requiring this new language in our home, but it was a hard habit to teach. They weren’t trying to be rude, but I was suddenly aware of all the “no’s, yes’s,” and “huh’s” that peppered their language, and it began to grate on my nerves. After a few weeks of trying to reinforce new manners I wasn’t seeing any progress. Then, like most of my finest parenting moments, I blurted out without even thinking, “Every time I hear you say ‘ma’am’ you get a penny!” That did it. That was all it took. Within one day their language had completely changed. After three days the babysitter noticed a drastic difference. Two weeks later their co-op teachers told me how polite and obedient they were in class. I was shocked and elated.

Even though it had only been important to me in light of their co-op teachers, I came to appreciate these manners for myself. And then something surprising happened. Simply saying “yes, ma’am” actually led to prompter, more cheerful obedience. When I called them and heard “ma’am?” in return, I began to speak more respectfully to them as well.

“Have you brushed your teeth?”

“Please go do that now.”

“Yes, ma’am.” Followed by actually getting up and going to brush his teeth!

To which I reply, “Three pennies, bud! Way to go!”

It’s a far cry from our previous way of speaking to each other.

“Did you brush your teeth?”

“Ok.” Followed by not actually getting up and going to do it until I repeat myself.

Requiring our children to use these words has truly transformed our family. We are all more respectful, gentler, and kinder. There is less yelling. Less repeating. Less frustration. I can’t believe all it took was a few dollars’ worth of pennies. After a few weeks we brought home rolls of pennies from the bank and dished out their rewards. Each child has enough to buy two whole things from the Dollar Tree, and they thought it was Christmas in April. I didn’t even actually count as it would have been too difficult, but no one seemed to mind as they placed their pennies in their piggy banks one at a time. Gradually we will fade this reward system away, but I have no problem using it for now.

If your family isn’t in the “yes, ma’am” habit, I encourage you to give it a try! Not just because old fashioned Southern people think you should, but because it will foster a more respectful and positive atmosphere in your home. Just like sweet tea, college football, and wearing your Sunday best for church, using “ma’am” and “sir” is one thing the South definitely gets right.

But don’t expect us to start calling soda “coke” any time soon. No, sir!

For more information about our organization, or to be placed on our enrollment waiting list please contacts us at thepulks@gmail.com
1-615-663-6276

The mission of Honeybee Christian Co-op is to create a place for educational enrichment where homeschooling families can work together to explore the world around us while enjoying fellowship and growing closer in our Christian faith.